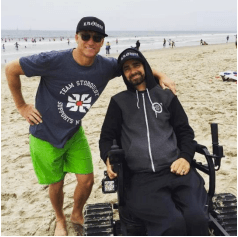 On Saturday, May 30, 2015, The William Warren Group Inc. (WWG), a real estate company that owns and operates StorQuest Self Storage, sponsored the Life Rolls On foundation’s “They Will Surf Again” event in Santa Monica, CA. On the verge of becoming a professional surfer, Jesse Billauer, from Pacific Palisades was thrown off his surfboard by a strong wave, broke his neck and severed his spinal cord; leaving him a paraplegic. Since his accident, Billauer defied the doctors’ who told him he would never surf again, became a role model and mentor to the entire surfing community and founded the non-profit organization Life Rolls On (LRO).

Learning more about Billauer’s inspiring journey, the WWG fostered a relationship with this incredible organization and an inspirational person through sponsorship of their events and storage of their gear. These events are held in nine cities on both coasts. It was an incredible experience for the WWG/StorQuest team to give paraplegics and quadriplegics the chance to experience the freedom of riding the waves, utilizing state of the art adaptive equipment.

The WWG is looking forward to participating in future Life Rolls On events and is proud to be involved in pushing the boundaries of possibility for those affected by this cause.